It is the end of the 41st millennium, and the Imperium seems on the brink of collapse. Abaddon's 13th Black Crusade is pouring out of the Eye of Terror, Armaggeddon has been consumed in a terrible third war, the Tyranids are tearing through the galaxy, and mankind's defenders are stretched to their very limit. In the Eastern Fringe, the Turan Sector has declared their secession from the Imperium of Mankind, under the influence of the shadowy Thaalax Eldar. As an Imperial Crusade led by Inquisitor Lord Mergulus sweeps into the Sector from to reclaim the worlds for the Emperor, in the opposite direction the Fraktaal Warp-storm disgorges daemonic legions to feast on the rotting carcasses of the Turan worlds. Across the entire Turan Sector, Chaos cults answer the daemonic call, and rise up in an orgy of violence... The Turan Sector is caught between the vengeful Imperial forces and the destructive hoards of Chaos.

From the Knight World of Demiterra, the Knights of House Nordcote answer the call for aid from their twin world, the Forgeworld Nemusordo. They descend to the planet's surface to fight for the Imperial Omnissiah against Turan secessionists and Chaos cultists alike. Whilst beseiging the Chaos-corrupted Forge previously known as the Omnissiah's Gaze, now known as the Unblinking Eye, they encounter a truly terrible foe - Dark Mechanicus Daemon-Knights, twisted combinations of vat-grown warp-infused flesh and rune-etched desecrated metal, each towering foe unique and insane. This is a heavily converted 1,500pts pure counts-as-Imperial-Knight army, dedicated to Chaos :)
Here's a group shot with a non-Chaos Imperial Knight for scale: The leader of the Daemon-Knights of the Unblinking Eye is the fierce monster known to some as the Eye of Rage, to the Mechanicus of Nemusordo as Phi Tau Digamma, and to House Nordcote as the Debaser. This machine/creature is the one who most resembles an Imperial Knight, but powered by warp-craft and pulsating daemon-flesh instead of by ancient technology. It is driven by blood-lust and battle-fury, firing off blasts of super-heated warp energy as it advances and then tearing its enemies apart in close combat. 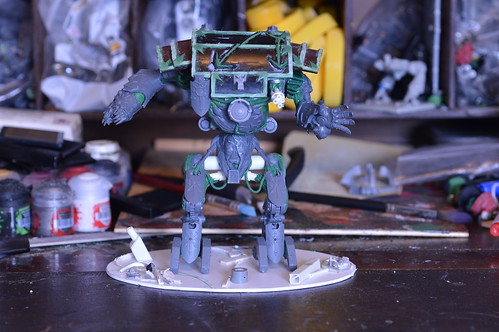 This is my Warlord, a Knight Errant. He's the Khorne-inspired badboy, so I went for a goat-legged look to evoke bloodthirsters and bloodletters. He's also got a good muscular torso (from the Soul Grinder), emphasising his physicality. His arms are from a Maulerfiend (with one hand replaced by a gun), they seemed nice and violent. All of the knights share the same basic torso concept: the sides & engines from an Imperial Knight, a daemonic vehicle hatch at the back (to tie in with the Defiler & Forgeworld Daemon-Engines), scratch-build armour, chaotic arms and lower bodies & torso fronts decided by their God. The precise bits used are basically driven by my bits box. I have lots of bits of chaos vehicles from over the years! My only costs in this project were meant to be 4 x Imperial Knight torso bits (the sides, the armour frame, the engines, the bases, the front plate with wires) from bits sellers. Although I did also cave and buy a Trygon kit for a Slaaneshi tail (as I wanted the torso for another project)... Rho-0 Phi Lambda, also known as the Unstoppable Eye or to House Nordcote as the Destroyer, is a daemon-knight unvarying focus, not stopping until its currently chosen target has been utterly destroyed, smashed to pieces either by its massive gun or its fierce claw. I knew that I wanted to have a Knight torso on the Defiler/Soul Grinder chassis, it's an obvious mix. I up-armoured the legs a bit, putting plates on the top as well as the shins. His front panel is the top of a Maulerfiend, plus lots of lovely greenstuff tentacles. He's the vaguely Nurgley one of my bunch, with his bulging belly and his greater bulk. He counts as a Paladin. He is a bit shorter than a true Imperial Knight, but he's much bulkier. Hopefully no-one will complain too much. The Dueller, called by some the Eye of the Moment or Pi Digamma Nu, is a swift and deadly daemon-knight, darting forwards on its sinuous snake-like lower body. Everything that this monster does is jerky and sudden, unpredictable spasms resulting in great blasts from its gun or its mighty talon-blade tearing foes apart. Whilst Rho-0 Phi Lambda is obsessively focussed, Pi Digamma Nu is always looking for new targets, new enemies to fight and to push itself to its limits. My second Paladin, this one is deliberately as much of a contrast as possible to the Defiler-Knight. He's Slaanesh-inspired, so the Trygon/Mawlock tail was an obvious choice of lower body. The arms are Defiler legs, giving him this absolutely huge grasp that seemed quite Slaaneshi, pushing the duelling-rather-than-brawling feel. His torso is a Soul Grinder's back, I love the exposed spine and with a little modification it has a great Slaanesh style mono-breast. And the exposed spine fits quite nicely with the Trygon's rib-cage ridge. His daemon-hatch is from a Forgeworld Khorne Blood Slaughterer. Which was de-chaosified and used as the basis for an Imperial Knight conversion, back before we had proper Imperial Knight kits. A nice circular path. The Protean Eye, or the Deformer, is formally identified as Tau Pi Kappa. This daemon-knight is little more than a shell filled with twisted, writhing, ever-shifting tubes and tentacles made of horrifying warp-flesh. It towers above the more fixed forms of the other daemon-knights, and is capable of truely terrifying rapid movements across the battlefield, appearing where least expected and unleashing an unmatched storm of bullets. Any unfortunate beings that get close to this blashemous machine soon disappear under a writhing mass of tentacles. My Cerastus Castigator. I wanted to highlight the number of attacks he has, both shooting and in close combat. Splitting the gun into two guns and having the close-combat attacks be from a huge nest of tentacles seemed a fun way to do that. He's meant to be vaguely Tzeentch-inspired, so he's tall like a flamer and tentacly like a horror? His weapons are obviously all from Forge/Maulerfiends, useful kit that! The Forgeworld Cerastus chasis is ridiculously tall. I think that this guy is about right, but I'm not sure.